Every sport requires different things, depending on what you want to perform. If you’re going to run fast, you need to get the tennis that supports your feet like that. Choose suitable skates if you want to run a lot and make your legs effective. Here we will discuss Jam Skates Vs Rhythm Skates-Every Skaters Must Know.

Whatever you need depending on the task you are performing is what your gear will be designed for. When it comes to rolling, It is not different. Different skates are meant for various activities, whether you need to go faster, make quick turns, have flexibility, or have aesthetic.

However, if you are not a roller skate specialist, you probably missed the fact that there are many types of roller skates or maybe you just differentiated them like in line and quads. You get one for each of the main disciplines: artistic, roller derby, jam skating, speed skating, shuffle skating.

Why Does This Matter?

Because since both disciplines are different and require different movements and support in different areas, you are likely to get hurt if you don’t get the skates your type of skating requires. Some disciplines need more ankle support, some need you to have a better cushion when landing. Whatever it is, there is a reason why there are different skates. Also, if you want to actually be good at it, the right kind of skates will help you perfect the techniques.

What Is Jam Skating?

Jam skating is one of the many ways in which skaters express their artistic side. Unlike derby roller or speed skating, jam skating is about expression. Jam skating is a mix of gymnastics, dancing, and skating that started around the 1970s. When it first began, the skates that were used were usually the artistic kind, that looks like boots. In the 1970s, jam skating was based on disco moves and disco music. However, nowadays jam skating has merged with break dancing and modern-day music, making it a little bit harder.

Jam skating became so popular that it eventually got skates designed for its specific needs.

What Are The Characteristics Of Jam Skates?

The main differentiation of jam skates from any other type is the lack of toe stop. Yes, you got it right, there are no brakes. This is because in some of the moves the jam skaters perform it can be annoying and might even ruin the move. Instead of having a toe stop these skates have a toe plug, which covers the hole other than anything. These skates are also extremely low-cut (which is where they go different from rhythm). They typically don’t get past the ankle bone.

Jam skates also have a much lighter frame’s weight, this is in order to help the speed and agile moves jam skating requires you to. Another thing they differ in is that they don’t have laces. This is mainly because of two reasons. First, because the foot can cover a larger area inside if the skate, this way your foot can control where it puts pressure and weight during the moves.

Without the laces, your foot can flex around more freely. You can do more stunts without going out of balance. The second reason is that, since jam skating tends to include a lot of turns, the shoelaces are likely to go unlaced and can get tangled on the wheels, which would definitely end up in tragedy.

They also have smaller wheels than most skates. This is because that way the skate can make direction changes faster, and accelerate afterward, which is essential to pull most of the stunts of the discipline. Apart from small they also tend to have wheel lips, their function is to absorb the impact and help you correct what could be an error during a landing, and make sure you don’t lose balance.

What Are Rhythm Skates Used For?

Rhythm skates are essentially designed for shuffle skating. Shuffle skating is similar to jam skating in the fact that it is also kind of dancing while using skates. However, shuffle skating tends to perform much less acrobat-like moves. It is actually a variation of jam skating. You have to skate forward and back to the rhythm of the music.

What Are The Characteristics Of Rhythm Skates?

As mentioned before, rhythm skates are also designed for pulling dancing stunts and slides like jam skates. However, they come with quite different characteristics. The biggest and most visual one is that rhythm skates come boot-shaped, meaning they go higher than your ankle bone, covering up all the ankle. As a matter of fact, at least physically, this skate is much more similar to an artistic skate (which are the ones that look like ice skates but with wheels).

The main goal the design of this skate has is to provide the ankle support and non-flexibility of an artistic skate while giving your foot the freedom of a jam skate.

Just like jam skates, rhythm skates don’t have a toe stop, but a toe plug. Also, they do have laces but put in a way that still allows your foot to control where it outs the weight and pressure on the sole.

Since these skates are also made to pull some stunts, the frame also tends to be lighter than your average skate. 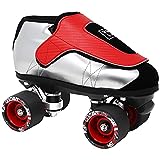 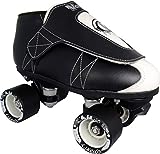