There are some different opinion from some of the sportsman on roller skates vs inline skates, which one will be appropriate for whom. Whether roller skates or inline skates which one should you buy. The roller-skating is always fun and at the same time offers a variety of health endurance training both at indoors and outdoors. Nevertheless, the two types of skates differ from each other and not just in appearance.

Many newcomers to skating wonder what can be easier to drive: roller skates or inline skates (also called inliners).

This article will give you a brief overview of the most important differences between inline skates and quad roller skates and help you to choose best one for you if you are not sure which type of skate is right for you. You should also know about some other inline skates.

The biggest difference is that inline skates are more stable overall and give riders more grip. They are very rigid on the sides, on the heel  also cover a larger part of the tibia than the traditional roller skates.

Not only is stability a matter of providing riders more confidence, but also the increased balance on inliner makes it easy for newcomers. It also familiarize themselves with the unfamiliar feeling of being on the move. Finally, the front and rear axles of inliners are significantly farther apart than roller skates.

The lateral instability caused by the missing pair of rollers with inliners. However,it does not create so problem because they are compensated after a short period of habituation by the tibia and the correct foot posture.

Aside from which alternative is easier to master, both offer their own advantages and disadvantages.

Small items such as stones or sticks can be run over much better with inline skates without falling any danger. This is due to the much narrower roller width of the inliner, that is why you drive effectively only on a strip which is a few millimeters wide.

As a result, small objects can be jumped over them and ultimately the risk of driving over uneven ground is lower because the track width is lower than with roller blades or inline skates. In addition, you can go much faster with inline skates than roller skates, because the rollers are larger in diameter and can run faster.

Last but not least, inliners are extremely versatile. You can drive them on many surfaces and use them for different purposes. They are particularly popular for playing hockey to develop on a dry surface for ice hockey.

In contrast, the classic roller skates are best suited for indoor use. On this underground, the traditional option is the first choice for practicing pirouettes or fast twists and turns.

On the beaches of the West Coast (Venice Beach, for example) you can still find dancers presenting their shows on roller skates. The roller pairs of the roller skates make twists and short, precise movements on skates easier for experienced skiers than on inline skates.

What are the fundamental differences between Roller quad skates and Inline Skates?

Arrangement of the wheels

When looking at the two different types of skate, the first thing that stands out is that the skate wheels on the inline skates are lined up in a row horizontal to roller plate. In the case of roller skates, two rollers are mounted parallel to each other in front and behind. These different role positions not only provide the typical appearance of the respective skate, but also have an effect on the dynamics and handling.

Position the Toe-stop Or Stopper

In quad skate or roller skates, the stopper is usually attached to the front toe. The brake block of the inline skates, however, is located at the rear end of the roller or wheel row. As a result, the braking process in the two skate types is very different. There are certain exceptions among the quad skates as well as the inliners, which do without stoppers. Among the inline skates types, for example, the Speed skates usually have no brake pads.

Design of the skates

The design is a key point in distinguishing the two types of skates. Most inline skates are rather simple and sporty. The manufacturers of roller skates, however, try to revive the feeling of the 80s and 90s through iconic designs, as these decades are considered a golden era of roller skates.

Quad skates are therefore available in chic retro designs, but also in classic elegant style. Especially for children, but also for adult fans, the colorful color combinations and the striking appearance of the shoes are a big plus. However, there are also exceptions: Roller derby skates, for example, are usually kept simple in color and place more emphasis on the sporty component than on a striking design.

Colorful, bright colors or special retro designs are rarely found on inline skates. They are usually kept in simple colors and cuts and tend to focus on the functional component.

Speed of the skates

While inline skates are designed primarily for speed and a sporty component, roller skates stand out above all due to their higher maneuverability and appealing design.

Inline skates are mostly designed to reach high speeds. This is possible above all, in comparison to roller skates, narrow rollers and their arrangement. The fact that the rollers are positioned one behind the other and not next to each other makes it possible to push off the ground more effectively and thus build up better pace. In addition, inliners forgive small bumps better than roller skates.

Quad roller skates may not reach the same speeds as inliners, but they are much more agile and easier to steer. The shorter distance between the front roller and the rear roller allows the cornering on small surfaces and with less effort.

Meanwhile, there are already special inline skates models , which allow a more flexible driving. However, most all-round inliners are still more focused on speed than mobility.

Mostly skates are for much less money than inliners. However, there are exceptions.

Most roller skates are in a price range of 40 – 100$. Quad skates exceeding the 100$ mark are rare. An exception to this, however, are professional sports skates. Roller skates created for roller skating can quickly cost over $500. Skates for roller derby or roller hockey are usually in the three-digit range.

Inline skate can be found from about 60$. However, if you want to run the sport regularly, you should look around in the high-end area. Good and solid processed inline skates are available from about 140 $, the prices, depending on processing and manufacturers, often exceed the 200 $ mark.

Comfort of using the specific skate

Quad skates are often more comfortable to wear than inliners with their hard outer shell due to their softer outer shoe. However, the foot is often not optimally supported and can break more easily than in inline skates.

Roller skates usually consist of a soft or semi-soft boot. This means that the outer shoe is made of a soft material (e.g., faux leather) and there is no hard outer shell. As a result, putting on and taking off the shoe is often easier and the wearing comfort is very high.

Inline skates, on the other hand, have a solid outer shell, which is usually made of hard plastic or a similar material and optimally supports the foot. The skates are usually a little more complicated when putting on and taking off, but the foot is better stabilized and prevents buckling of the ankle.

In keeping with the retro design roller skates are usually equipped with the typical lace closure. Inline skates, on the other hand, often have push-lock buckles.

However, quad skates can also have push-lock mechanisms. In both types of skates, the buckles or laces are often supplemented with Velcro straps, which should guarantee an even better grip.

Ultimately, you should not only stick to our assessment. But you each either buckle up a pair of quad roller skates or inline skates. Which shoe is right for you depends strongly on your expectations and demands on the skates? Beginners should try to find out on which skates they feel safer before buying.

What do you prefer roller skates or inline skates? Let us know! 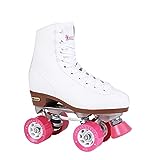